Energy consumption in Europe rose for the third consecutive year in 2017, pulling the EU further away from its 2020 energy efficiency objective, according to official figures published on Thursday (7 February).

Energy consumption in the EU increased by 1% in 2017, according to Eurostat.

Energy production and use, including transport fuels, account for some 80% of the EU’s greenhouse gas emissions, making energy consumption a key indicator in the fight against global warming.

And the long-term trend is not encouraging either. Since 1990, consumption has fallen by only 0.4%, Eurostat indicated.

“The gap to energy efficiency target for 2020 continued to widen,” the EU’s statistical agency said in a note. 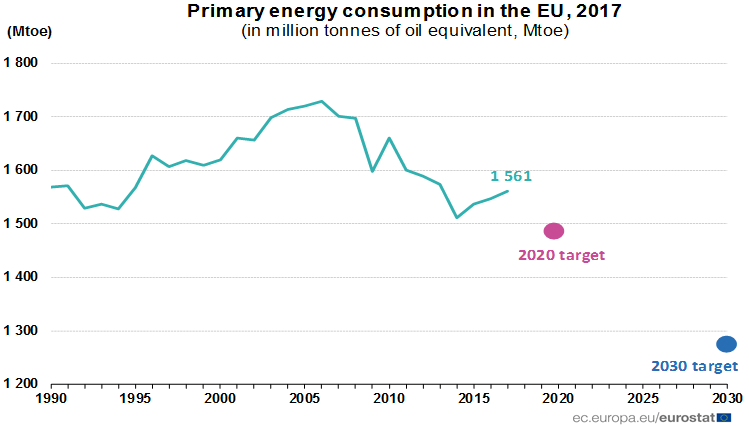 Samuel Thomas is a senior advisor at the Regulatory Assistance Project (RAP), an independent NGO.  According to him, the figures “should not be a surprise” and are mainly explained by GDP growth.

“It’s the economy. Between 2014 and 2017, EU gross domestic product grew at its fastest rate since the mid-2000s and, however much we would like to kid ourselves, economic activity is not yet meaningfully decoupled from energy consumption,” Thomas said in a recent opinion article.

With only a year to go until 2020, he says Europe’s best chance of meeting the energy efficiency targets are related to uncontrollable events, like an economic slowdown, or an exceptionally warm winter.

Bill Gates: COVID-19 is awful. Climate change could be worse

First report on impact investing in the nordics