It wasn’t so long ago that the stellar performance of tobacco stocks such as British American Tobacco Plc and Philip Morris International Inc. was enough justification for asset managers to hold onto their investments, despite a broader push toward socially responsible investing.

But in recent years, a flurry of European pension funds and insurers have begun divesting their holdings, putting pressure on the share prices. BAT had its worst year on record last year, slumping 50 percent, as the U.S. Food and Drug Administration toughened its stance toward the tobacco industry. Philip Morris slumped 37 percent. 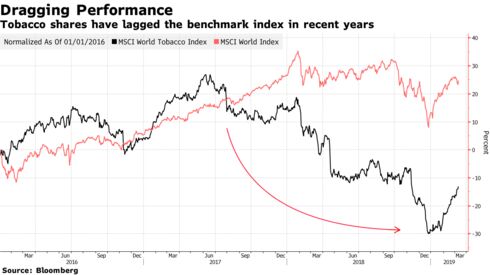 The MSCI World Tobacco Index returned an impressive 1,437 percent from the end of 1999 through 2015, compared with just a 72 percent return for the broader MSCI World Index. But since 2016, when momentum for tobacco-free portfolios finally started to take hold, the industry has underperformed the broader benchmark.

“Clearly, selling pressure from some investor classes who have decided that it is inappropriate to invest in tobacco for environmental, social and governance reasons will have been unhelpful for tobacco share prices, given the scale of some of the institutions concerned,” Investec analyst Eddy Hargreaves said in written comments.

Bronwyn King, an Australian doctor who treats cancer patients, was shocked to discover in 2010 that her retirement fund was investing in tobacco companies. This prompted her to establish Tobacco Free Portfolios, a non-profit organization that encourages pension funds, sovereign wealth funds, banks and insurers to stop investing in tobacco.

The initiative went global: French insurer Axa SA in May 2016 announced it would stop investing in the tobacco sector due to the prevalence of smoking-related diseases. U.K. insurer Aviva Plc started selling its tobacco shares in June 2017 and no longer holds any of the stocks in its actively managed funds, the company said.